Ovarian cancer is caused by an abnormal growth of cells in the ovaries ―the reproductive glands found only in females (women) that produce eggs (ova) for reproduction―, and is responsible for more deaths than any other gynecologic cancer being among women the eighth most common cancer and the fifth leading cause of death, being most common in Caucasians that in African American.

There are 3 different types of Ovarian Cancer, which are classified according to the type of cell from which they originate, such as:

Risk factors for Ovarian Cancer include:

Ovarian Cancer may cause several signs and symptoms. Women are more likely to have symptoms if the disease has spread beyond the ovaries, but even early stage Ovarian Cancer can cause them. The most common symptoms include:

Survival in Ovarian Cancer is also strongly associated with tumor stage: when the cancer is detected early ―Stages I or II―, the survival rate at 5 years is 95% and 65%, respectively, but the lack specific symptoms makes it also known as the “silent murderer” because 75% of patients arrive at an advanced stage ―III or IV Stages―, without having had previous symptoms, where survival rates are low.

As shown in the chart below, in Ovarian Cancer, like many other cancers, mortality is substantially higher in patients whose disease is diagnosed in late stage or has metastasized to other organs. 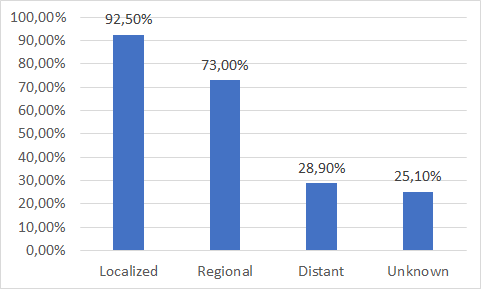 Currently, there is no effective method of early detection of Ovarian Cancer. It is usually diagnosed in advanced stages and only half of women survive more than five years after diagnosis.

Multiple studies have shown that the prognosis and survival depend largely on the amount of tumor remaining at the time of the initial surgery. Patients without residual tumor or nodules smaller than one centimeter in diameter have the greatest chance of cure and long-term survival.

Most women with Ovarian Cancer have symptoms. However, these symptoms are often vague and can be attributed to less serious conditions such as indigestion, weight gain or the consequences of aging, which makes it really difficult diagnosis. In this sense, when pathology is suspected, a physical examination is performed and then is followed ―if palpation enlarged ovary or fluid in the abdomen (ascites)―, by different diagnostic procedures ―such as ultrasound image, computed tomography (CT), positron emission tomography (PET) or magnetic resonance (MR)―.

Doctors have tried different methods for early diagnosis, including the use of CA 125 Tumor Marker, but the results are not satisfactory, since this marker has a low Sensitivity in the early stages while offering a high proportion of false positives (FP) in premenopausal women.

For some years, the valuation levels of HE4 ―a “novel” Tumor Marker―, offers greater Sensitivity for these early stages, and greater Specificity, so that through a combination of the values of CA125, HE4 and menopausal status of the patients, It was designed the ROMA (Risk of Ovarian Malignancy Algorithm) ―an algorithm with 3 variables and low complexity to help physicians in the diagnosis of Ovarian Cancer―.

Another different approach sought to improve early diagnosis by combining the CA125 and characteristics of the ovarian mass obtained by ultrasound, which led to the RMI (Risk of Malignancy Index for Ovarian Cancer) program.

Both algorithms are useful to help in the diagnosis of abdominal masses, and in the monitoring of treatment, but both can be clearly improved because ROMA does not consider ultrasound or age of the patient and the RMI does not use the best tumor marker to date for the diagnosis of Ovarian Cancer (HE4), well as other variables that we have found are related to this disease in our own MBDAA Test for Ovarian Cancer.

Here is where our solution can help by being an innovative, non-invasive, accurate, and cost-effective diagnosis solution, based in a simple blood test that can detect Ovarian Cancer with 93.8% of Sensibility and 94.4% of Specificity, while reduces ―in a very significantly way―, the number of false positives (FP) and false negatives (FN) typical of other diagnosis procedures.

If do you want to read more about OncoOVARIAN Dx, our Multiple Biomarkers Disease Activity Algorithms (MBDAAs) for an innovative, non-invasive, accurate, and cost-effective Ovarian Cancer diagnostics, please click on next button: