Liver Cancer is a type of cancer that begins in the liver (this is a football-sized organ that sits in the upper right portion of the abdomen, beneath the diaphragm and above the stomach).

The liver has a wide range of functions such as detoxification of various metabolites, control of the carbohydrates and fat metabolism, decomposition of red blood cells, plasma protein synthesis, hormone production and the production of biochemical necessary for digestion.

It may be important to remark that it is a vital organ and supports almost every other organ in the body. Because of its strategic location and multidimensional functions, the liver is also prone to many diseases and that can lead to better conditions for cancer development in this organ.

Liver Cancers typically start in hepatocytes, but there are also other types of liver cancer, such as intrahepatic cholangiocarcinoma and hepatoblastoma, are much less common.

A number of factors may increase your risk of Liver Cancer. Some risk factors can be managed, for instance, by quitting smoking, but other factors cannot be controlled, such as family history.

Risk factors for Liver Cancer include:

It is often hard to find liver cancer early because signs and symptoms often do not appear until it is in its later stages. Small liver tumours are hard to detect on a physical exam. By the time a tumour can be felt, it might already be quite large.

Some symptoms could be:

When the cancer is still confined to the liver, in stages I, II, and some stage III cancers, the 5-year relative survival rate for people with localized liver cancer is about 30.5%.

The high mortality of this type of cancer can be explained because of the prominent importance of the liver in terms of metabolism control and general detoxification too. It may be important to remark that when the liver cancer is combined with other disease conditions ―such as hepatitis or cirrhosis― the chances to survive are even lower.

PLEASE NOTE: EARLY DIAGNOSIS IN CANCER IS VERY IMPORTANT BECAUSE CANCER THAT’S DIAGNOSED AT AN EARLY STAGE ―BEFORE IT’S HAD THE CHANCE TO GET TOO BIG OR SPREAD―, IS MORE LIKELY TO BE TREATED SUCCESSFULLY. IF THE CANCER HAS SPREAD, TREATMENT BECOMES MORE DIFFICULT, AND GENERALLY A PERSON’S CHANCES OF SURVIVING ARE MUCH LOWER.

As shown in the chart below, in Liver Cancer, like many other cancers, mortality is substantially higher in patients whose disease is diagnosed in late stage or has metastasized to other organs. 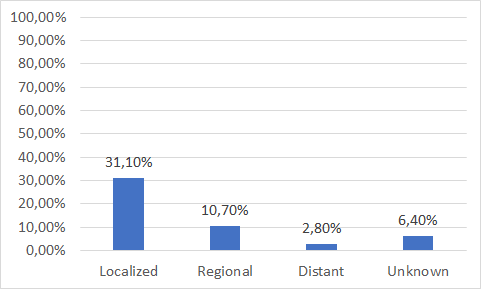 For years, imaging techniques, biopsies and blood tests have been at the forefront of cancer diagnosis. Unfortunately, these procedures are inherently limited: first of all, the added risk and stress associated with biopsy can be hard on patients; secondly, the liver is covered by the right ribcage and therefore it is difficult to apply the imaging techniques; thirdly, blood tests present nowadays are not accurate enough to determine the presence of the liver cancer; and finally, all these procedures add significant costs over the course of treatment.

Besides, liver biopsy is an invasive method that enables appropriate prognostic classification of the disease, but has some complications, and should only be performed in selected individuals: high risk of steatohepatitis or fibrosis risk of laboratory or clinical or other co-existing liver disease.