Prostate Cancer begins when cells in the prostate gland ―gland found only in males that makes some of the fluid that is part of semen―, start to grow uncontrollably.

The prostate is below the bladder and in front of the rectum, and its size may change with age: in younger men, it is about the size of a walnut, but it can be much larger in older men.

Some prostate cancers can grow and spread quickly, but most grow slowly. In fact, autopsy studies show that many older men (and even some younger men) who died of other causes also had prostate cancer that never affected them during their lives. In many cases neither they nor their doctors even knew they had it.

There are several types of Prostate Cancers, but almost all are from the main type:

Other types of cancer that also start in the prostate gland are:

Although we don’t yet completely understand the causes of prostate cancer, researchers have found several factors that might affect a man’s risk of getting it.

Risk factors widely accepted by the medical community for Prostate Cancer include:

Other risk factors with less clear effect on Prostate Cancer include:

In stages I and II ―where there is no sign that the cancer has spread outside of the prostate― the relative 5-year survival rate is nearly 100%. About 4 out of 5 prostate cancers are found in this early stage. As long as the cancer has spread from the prostate to nearby areas ―cancers in sage III and IV― the relative 5-year survival rate for regional stage prostate cancer is nearly 100%. In more advanced IV stages that have spread to distant lymph nodes, bones, or other organs the chances to survive in the next 5 years is more or less 28%. As it can be interpreted by this data, the mortality associated to this kind of cancer is not very high since it has been detected before it is too late.

As shown in the chart below, in Prostate Cancer, like many other cancers, mortality is substantially higher in patients whose disease is diagnosed in late stage or has metastasized to other organs. 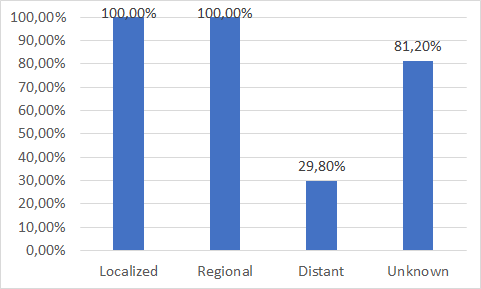 Currently, Prostate Cancer diagnosis is done by a prostate biopsy (a test to remove small samples of prostate tissue to be examined under a microscope).

A biopsy may be done when the PSA Test is performed and high levels of Prostate-Specific Antigen are found in blood, or after a Digital Rectal Exam (DRE) finds an abnormal prostate or a lump.

Besides, some urological maneuvers have also effect on the level of PSA, such as:

In a similar way, after hormonal therapy PSA does not always reflect tumor behavior, and Anti-androgen medication may cause low levels of PSA in the presence of residual disease.

Moreover, a prostate biopsy has a slight risk of causing problems, such as:

Here is where our solution can help by being an innovative, non-invasive, accurate, and cost-effective diagnosis solution, based in a simple blood test that can detect Prostate Cancer with 81.7% of Sensibility and 98.2% of Specificity, while reduces ―in a very significantly way―, the number of false positives (FP) and false negatives (FN) typical of other diagnosis procedures.

If do you want to read more about OncoPROSTATE Dx, our Multiple Biomarkers Disease Activity Algorithms (MBDAAs) for an innovative, non-invasive, accurate, and cost-effective Prostate Cancer diagnostics, please click on next button: