Lung Cancer is a type of cancer that begins in the lungs (two spongy organs in your chest that take in oxygen when you inhale and release carbon dioxide when you exhale).

When you breathe in, air enters through your mouth or nose and goes into your lungs through the trachea (windpipe). The trachea divides into tubes called bronchi (singular, bronchus), which enter the lungs and divide into smaller bronchi. These divides to form smaller branches called bronchioles. At the end of the bronchioles are tiny air sacs known as alveoli.

The alveoli absorb oxygen from the inhaled air into your blood and remove carbon dioxide from the blood. This is expelled from the body when you exhale. Taking in oxygen and getting rid of carbon dioxide are your lungs’ main functions.

Lung Cancers typically start in the cells lining the bronchi and parts of the lung such as the bronchioles or alveoli.

Doctors divide Lung Cancer into two major types based on the appearance of Lung Cancer cells under the microscope, such as:

Several of factors may increase your risk of Lung Cancer. Some risk factors can be managed, for instance, by quitting smoking, but other factors can’t be controlled, such as family history.

Risk factors for Lung Cancer include:

Although most Lung Cancers do not cause any symptoms until they have spread too far to be cured (Lung Cancer is one of cancers known as “silent cancers”). Some people with early Lung Cancer may have any of next symptoms:

Lung Cancer mainly occurs in older people. About 2 out of 3 people diagnosed with Lung Cancer are 65 or older, while less than 2% are younger than 45. The average age at the time of diagnosis is about 70. People presenting at stage I have the highest survival (35%). Survival is lower for those diagnosed with stage III disease (6%). Stage IV survival could not be calculated at five years due to the small number of people surviving more than two years. Survival for those people with stage not known is similar to those with stage III disease (6%).

As shown in the chart below, in Lung Cancer, like many other cancers, mortality is substantially higher in patients whose disease is diagnosed in late stage or has metastasized to other organs. 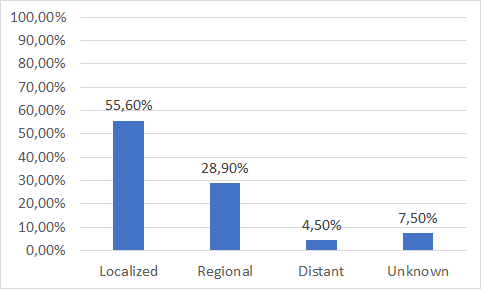 Currently, doctors consider age and smoking habits of patients with symptoms such as the two main factors to model the risk of Lung Cancer.

If patients fall into this consideration, it is recommended a system based on a computerized tomography (CT) ―a test with a high cost that sometimes detected benign nodules as potentially cancerous―. Approximately 28 percent of high-risk individuals who are subjected to CT scans obtained a positive finding, since the test often identifies all existing pulmonary nodules.

However, 97 percent of lung nodules are not cancer ―the Lung nodules can be caused by a long list of diseases, both infectious and fungal infection, tuberculosis (TB), abscesses of lung or pneumonia; and non-infectious, such as rheumatoid arthritis (RA), Wegener’s granulomatosis or Sarcoidosis―. Moreover, 25 percent of suspicious nodules are benign, meaning that 1 of 4 individuals with nodule and suspicion of cancer is not.

Then, because these procedures are inherently limited to a mass or nodule finding, without providing critical molecular information in order to discriminate between malignant from benign, it is needed a biopsy to confirm, with certain related problems: first of all, the added risk and stress associated with biopsy can be hard on patients; secondly, for those patients with advanced or inaccessible cancers, biopsy may not be an option; and finally, all these procedures add significant costs over the course of treatment.

In this way, an analysis of cost/effectiveness published on November 6, 2014 in the New England Journal of Medicine (http://www.ncbi.nlm.nih.gov/pubmed/25372087) from data from the National Lung Screening Trial (NLST) estimated that the costs of a computed tomography were $1,631 per person and $81,000 per year of life gained adjusted for quality.

Here is where our solution can help by being an innovative, non-invasive, accurate, and cost-effective diagnosis solution, based in a simple blood test that can detect Lung Cancer with 93.5% of sensibility and 96.2% of specificity, while reduces ―in a very significantly way―, the number of false positives (FP) and false negatives (FN) typical of other diagnosis procedures.

If do you want to read more about OncoLUNG Dx, our Multiple Biomarkers Disease Activity Algorithms (MBDAAs) for an innovative, non-invasive, accurate, and cost-effective Lung Cancer diagnostics, please click on next button: